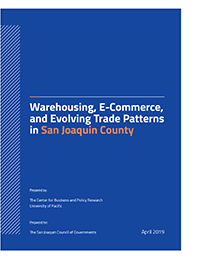 A short drive across San Joaquin County in any direction is quite likely to take you past some part of its expansive goods movement system. The County has been a center of Northern California trade at least since its founding 170 years ago. While the historic importance is well known, the past decade has brought dynamic change and accelerated growth. E-commerce, increasingly connected technologies more generally, and growing mega-regional coherence have played important roles in this change.